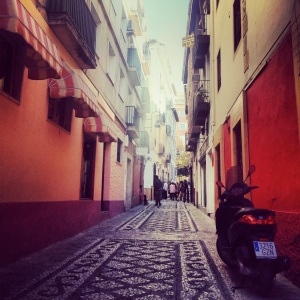 There are plenty of places I have yet to explore in Andalucia but to me so far Granada is the diamond of southern Spain. Not only does everyone rave about “Granadaaaa!! Haven’t you been?? Oh you must go.” From the bustling city centre, various eccentric neighborhoods, pueblo-style homes tucked away in the mountainside to the perched flamenco guitarists atop the Albayzin, serenading the crowds enjoying the sunset off Mirador San Nicholas. This place is magic. Where old meets new. A diamond not in the rough. Throw in the cobblestone streets and I was in heaven. This city is a fun mix of traditional Spain meets modern flare. You can nerd-out with a free walking tour of Granada’s colorful history during the day, (can’t recommend these enough, SO interesting! Plus a hot local guide? Yes please!) while it’s young, hip nightlife will you keep you out well past your bedtime. (If you’re interested in the best Kebob’s of all time- and why wouldn’t you be- get in a cab and ask the driver to take you to the best kebob place in town, that’s exactly what we did, and how convenient I forgot the name, but it was packed at 6am so I know it’s a popular spot.) This city is filled with fashionistas bundled up in their fur-hooded anorak coats, fluffy wool scarves, and wedge booties. Their heels clickitty-clack up and down the streets no matter what the season or how haphazard the cobblestones may be. You can admire their fierceness (and wish only to be as cool) as they sip their canas outside, enjoying the cool, dry weather. 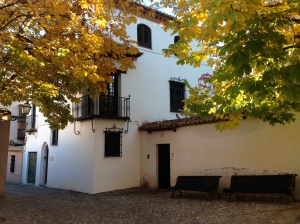 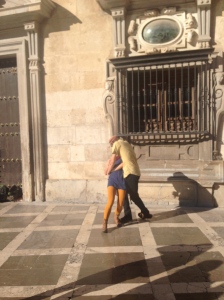 Weaving our way through the spectacle that is the mazes of bars and cafes, the first day we made our way to the Alhambra, this old enormous castle atop a beautiful mountain with plenty of breath-taking views and enormous structures to gawk at. When you peer over the short walls lining the high grounds you will see the thousands of little rooftops side by side nestled in the city burrows. The clouds stretching delicately across the bright sky, sunlight beaming through, and you realize why everyone has been bugging the hell out of you to get your ass to Granada. 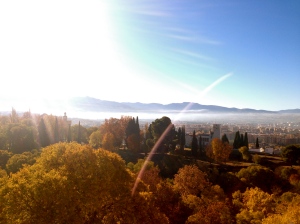 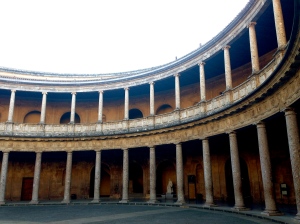 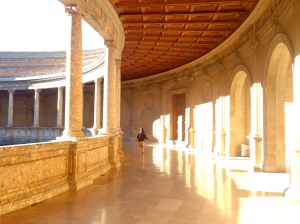 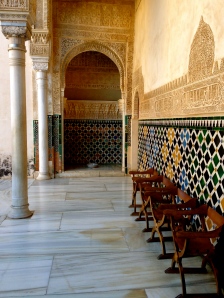 Anyways, the Alhambra. I can’t really explain what we saw, but it was a good time. (So,  just check out the pics, they speak for themselves.) There were lots of big cool structures that we’re pretty impressive. And I do remember a conversation involving dragon eggs. Haha is it clear we should’ve gone with the tour for this one?

With it’s Arabic influence the Alhambra makes for interesting and intricate architecture. It also comes with an equally curious backstory. About 10% of the Spanish language is Arabic! (I know right, whodathunk!?) “Hola” and “ole,” for example, stem from Arabic roots. Another cool fact, when Queen Isabella decided to make everyone convert to Catholicism she gave the people 3 choices: convert and change your last name, leave the country and your money behind, or death. (And some people actually chose death! “I choose to die!” (WhAT!??)) So the people who decided to stay and changed their last name were given names of common nouns, por ejemplo, Iglesias (church) -hello, Enrique Iglesias, anyone? Or Bandera (flag). So when you see someone with a name like that it’s very likely their family is of Jewish or Muslim decent and was at some point made to convert to Catholicism to appease the Queen! 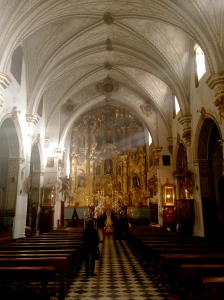 Also there are some really amazing churches that are definitely worth checking out. This one was on the way to the Jewish district that I was hell-bent on exploring. We never really found out if we made it to the Jewish district or not, but this was either in that area or on the way! Haha, I know, typical. Hey, half the fun is getting lost and stumbling upon unforeseen tresures, am I right?!

At night we went to a few bars, including this one dingey, dirty looking spot. I love me a good old questionable-looking, probably-not-entirely-sanitary, dive bar. But hey, it was down the street and had 1 euro shots. Sign. Me. Up!! So we gathered up some new friends from the hostel and hit the town. We ended up at this alternative boho place (no, not the chic kind) packed with dread-headed hipsters. I can’t say that I fit right in but I felt pretty cool for a second pretending I did and had a blast just the same. We drank beer by the bottle (no taps here!) while reggae pulsed through the crowd, the night drifting by, the ambiance dark and vibrant. 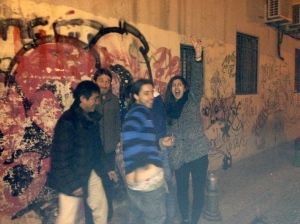 A must-see spot is Paseo de Los Tristes, which leads up to the Albayzin. This street has loads of cafes, bars, and restaurants of all types. You can tapa hop your way down the road or pick a place outside under the vined awning next to the river to enjoy a full meal under the sun. 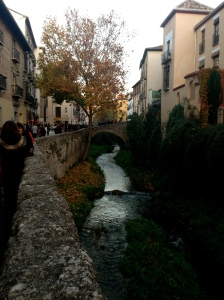 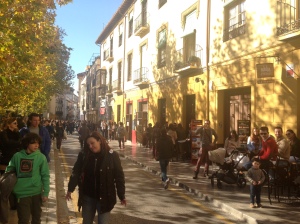 After your bellies are full and you’ve got a good buzz follow the road up the hill to the Albayzin and check out the Mirador San Nicholas, the lookout where you can view the sunset overlooking the whole town. This is where some of the gypsies live in cave houses! (I know, sounds weird, but you couldn’t even tell a cave houses from a regular house because from the outside they look the same.) Don’t worry, they don’t bite 😉 This area is a gem. It’s gorgeous. Once you get to the top you can see for miles and the views are out of this world. If you go during the day you can peruse the venders selling random nick-knacks if that’s your thing, listen to some of the buskers playing music in the street, or grab a cana and tapa from one of the cafes. 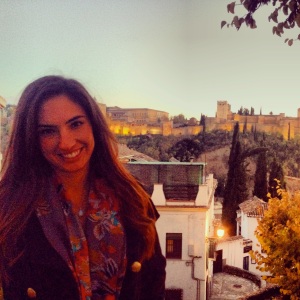 And best of all, there’s always a flamenco guitarist playing and singing nearby. If you haven’t heard flamenco it’s like nothing you’ve ever heard before. Not only is the guitar style very unique and difficult to perform but the singing is more like a cry or chant, which doesn’t exactly sound like a beautiful description, but to see it performed in from of you is mesmerizing. It’s one of the coolest things I’ve seen since my move abroad. 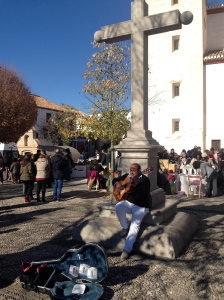 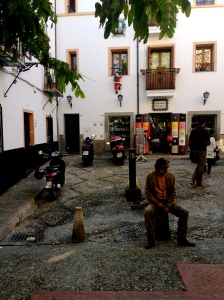 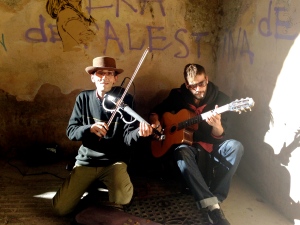 Side note. I was reading this list that kept popping up on my facebook feed, something like “20 reasons to drop everything and move to Spain.” And out of twenty reasons NOT ONE was flamenco or spanish music. AhwhAT?! Amateurs. 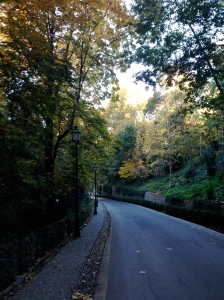